Homes for evicted people from the Trinitarian Island but financed 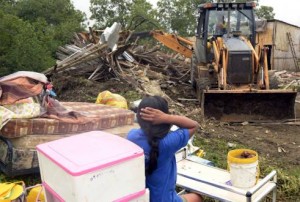 Families evicted on Friday, March 27 from the cooperative Melida Toral in Trinitaria Island, will be able to access the government´s housing plan. The Minister of Urban Development and Housing, Maria de los Angeles Duarte, said that families who are on the banks of the estuary will be relocated, as these are prone to suffer terrible risk situations.

The government has implemented a contingency plan, in which several homes will be available for the evicted families, who will be able to finance them in a long term. 47 families are registered to access the state plan, but 6 families still insist to stay on the site, said the official, who also stated that gratuity is not envisaged since that would foster the illegal settlements.

Duarte criticized the aid provided by the Municipality of Guayaquil for those evicted, by placing a tent for assistance in the conflict zone. “To be very clear, those who have the responsibility are the mayors, who allow these settlements in hazardous locations, (…) for example in the city of Guayaquil, the mayor (Jaime Nebot) rather than relocating them in any housing plan he has, like Mucho Lote or Mi Lote, etc … has brought them a little tent to the site,” said the minister.