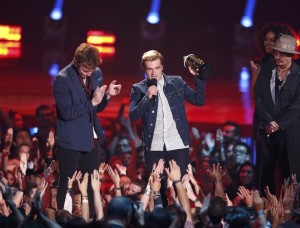 Josh Hutcherson received the award for best actor along with Jennifer Lawrence, who was unable to attend the ceremony

In the delivery of MTV Movie Awards 2014, held in Los Angeles last sunday, the film `The Hunger Games: Catching Fire´ was the winner, imposing over           ` 12 years of slavery´, ‘The Wolf of Wall Street´ , `American Bluff´ and’ The Hobbit´. This film also won the award for best main actors thanks to the roles of Jennifer Lawrence and Josh Hutcherson.

Johnny Depp presented the award to Josh Hutcherson, who paid tribute to Philip Seymour Hoffman, who died earlier this year, and played Plutarch Heavensbee. `I know that if Philip was here, he’d think this is wonderful, and having him in our films was one of the most wonderful things´, said Hutcherson, who came along with Sam Caflin, supporting actor of the saga.