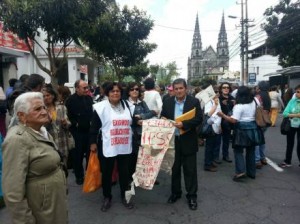 IESS former workers bled in the exteriors of the Zarzuela building in Quito, demanding their retirement payment.

Yesterday, about 100 former workers of the Ecuadorian Institute of Social Security (IESS) among administrative personnel, physicians and nurses staged a new protest at the basement of the Zarzuela building, where the IESS Board meets. They demanded the employer’s retirement payment.

Some demonstrators, bled to draw attention of the authorities gathered on the fourth floor.

Jorge Garcés, representative of the former employees, declared that the IESS, in addition to the non-payment to those who retired earlier this year, has also suspended the October retirement payment of some former workers.

He added that the problem lies in a draft audit issued by the Comptroller General that does not consider this item frasible. “We do not have a salary, we have no pension, no job, can no longer wait”, Garcés said.

Hours later, on the fourth floor of the entity, a committee of retirees was attended by Roberto Guevara, deputy Director of IESS, but is not known if they reached an agreement.