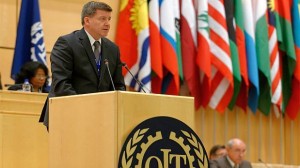 On the night of October 13, the 18th regional meeting of the International Labour Organization (ILO) was inaugurated. The meeting was held in Lima, Peru, with the participation of 400 visitors and 33 delegations, including the Ecuadorian.

Guy Ryder, ILO Director, indicated that the fundamental axis is to ensure that 130 million of Latin Americans come out of casual labor. He called to the tripartite working between the Government, employers and workers.

At the meeting, Freddy Otarola, Peru’s Minister of Labour, was also elected as Chairman of the plenary.

He highlighted the policies for growth and poverty reduction in Peru. Finally, the Peruvian President Ollanta Humala, opened the meeting, highlighting the tripartite work and fight against casual labor.