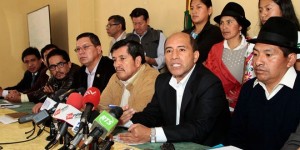 Indigenous, social and political organizations resolved to participate together in a citizen mobilization and in the next elections. These resolutions were taken in Zamora during the weekend. Among those are to protest against the amendments, labor reforms and restricting admission to universities.

“The march was resumed from the south of the country to Quito, but this will be held in unity in all sectors. Rafael Correa divides us, we seek to participate together to oppose that strategy,” said the prefect of Zamora, Salvador Quishpe.

According to him, another key issue is the development of a government plan to participate in the elections of 2017. They call for 10% of the General State Budget is dedicated to encourage production in Ecuador.