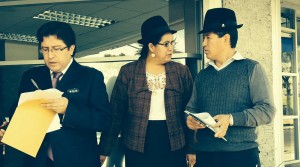 The Cotopaxi Indigenous leadership challenged the judgment of the Constitutional Court (CC) in order to annul it, which according to the organization, eliminates the powers of indigenous justice.

The appeal was presented by lawyers Raul Ilaquiche and Carlos Poveda, and Assemblywoman of Pachakutik Lourdes Tibán. It was made in the name of Victor Olivo, who raised the extraordinary action of protection in 2010.

In the document, the constitutional judges are asked to substantiate and clarify the legal and anthropological meaning of what implies an internal conflict in a community, in addition to the scope of the Communication Law rules, relating to prior censorship.

It is also asked to declare the nullity of everything done by the CC, because according to the organization, the statement did not obey Article 66 paragraph 13 of the Organic Law on Jurisdictional Guarantees and Constitutional Control.

The President of the CC Patricio Pazmino said: “This slight and irresponsible declaration(…) intends to affect communities because it ignores the effect of the system of administration of indigenous justice in Ecuador”.