Indigenous protest continues in the Sierra and the Amazon region 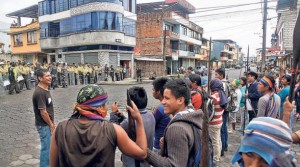 Yesterday there were clashes with the police, because indigenous blocked the different sections of the Cuenca-Loja highway.

The clashes, which have occurred since August 13, heated up. The Ecumenical Human Rights Commission registered 30 detainees. “We condemn the raid on the community territories and the raids in the houses,”said the organization.

“According to testimonies of the comrades, police and military entered the homes of the families to take out leaders, youth and women and arrest them.”

In Morona Santiago tension remains. So far, hundreds of Shuar and Achuar indigenous moved to radicalize their protest in accordance to the mandate of the Confederation of Indigenous Nationalities of Ecuador (CONAIE).

Access to the governor´s office of Morona Santiago is blocked since Sunday afternoon. Indigenous groups were placed at the intersections of the downtown streets, surrounded by groups of police and military. Although yesterday was peaceful, the guards of the Shuar and Achuar nationalities, intended to guard the governor´s office, do not allow the entry of citizens.

Attorney General´s office shows a balance of the national strike