Manuela Picq was released and will not be deported 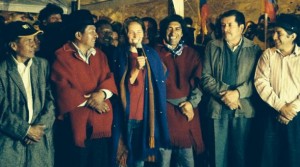 Brazilian journalist Manuela Picqwas released Monday evening after her hearing in Quito, and will not be deported by order of Judge Gloria Pinza.

Upon her release, she thanked the indigenous in El Arbolito park, with a greeting in Quichua. “I am from this land and if the government thought it was not Ecuadorian, you made me Ecuadorian today.”

She also said it was a relief to be free and called for the release of other detainees. She expressed solidarity with the people of the Loja Saraguro county by the clashes they had yesterday with the police and the army.

Picq and her partner, Carlos Perez, received as a sign of gratitude with the “Pacha Mama” (Mother Earth), a cleaning ritual and then they burned incense. After the ritual they agreed to return to the streets on Wednesday, at 17:00. They will depart from the exterior of the facilities of the Social Security Institute (IESS) and try again reach the Plaza Grande.