Indigenous refuse to vacate their headquarters in the day of Resistance 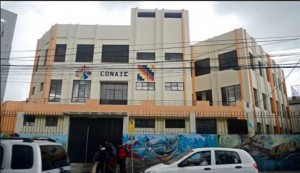 The Indigenous said they want to prove that their headquarters is their home. After the announcement of the Government that the loan agreement with the indigenous organization will be revoked, CONAIE has organized different activities at its headquarters in the north of Quito.

Today will be held the day of Resistance for the Dignity of Peoples and the End of Year Meeting,they indicated in their social networks. On that day there will be a photographic exhibition of the history of CONAIE, a discussion and an intercultural festival.

On December 11, the Ministry of Inclusion notified the CONAIE the end of the loan, after the President criticized that the property has been used for political purposes.