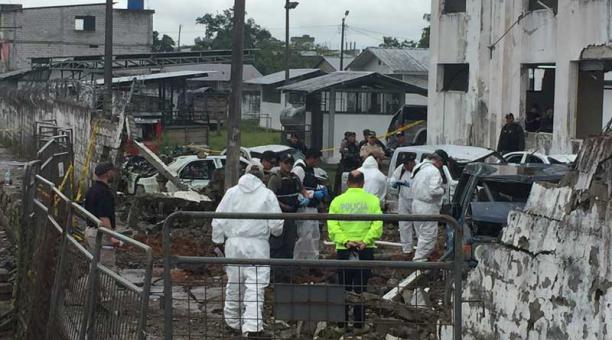 The alert originated from the Directorate General of Intelligence (DGI). Through a telegram all the heads of intelligence and special forces of the Police were informed about a possible terrorist attack similar to that which took place in the San Lorenzo police station.

According to the communiqué, which was broadcast at 8:00 pm on Thursday, February 22, 2018, senior and subordinate officers are asked to communicate with commanders of zones and sub-zones “so that they can be alert of a threat with explosive devices in police units of the same type as in San Lorenzo (Esmeraldas).

” For this reason, the telegram indicates that field teams will be designated to perform controls on the prevention of police barracks. In addition, it is indicated that they must be vigilant in dawn shifts and that they must “reinforce the security of the facilities of the different Security Houses of the jurisdiction under their command 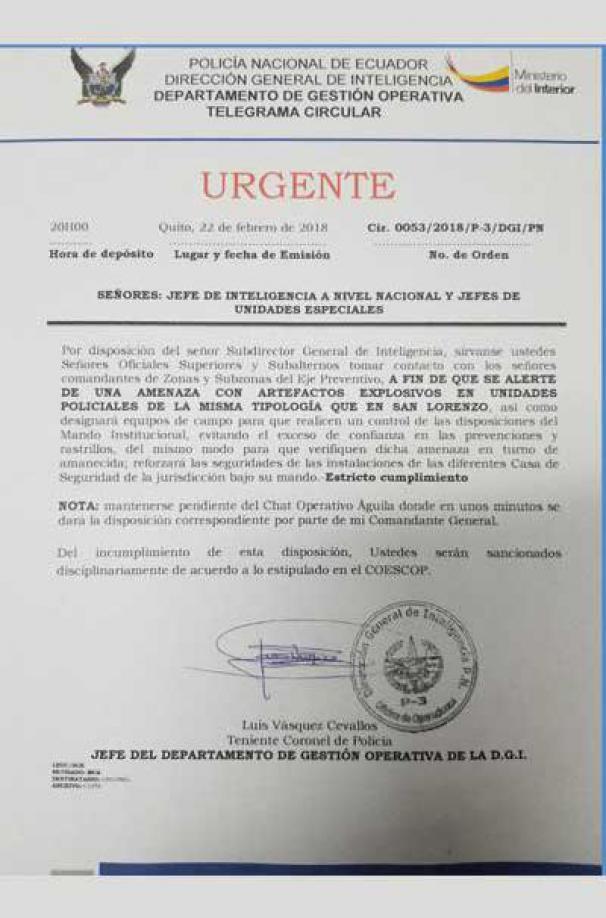 The telegram was issued in an “urgent” and “strict compliance” manner. The document also indicates that the police chiefs must keep an operative chat pending, where the corresponding dispositions will be given. César Navas on the explosion in Colta: ‘There are two or three hypotheses that are handled’

On Friday morning, February 23, 2018, Interior Minister César Navas spoke about the explosion of a car on the Riobamba-Colta highway, in Chimborazo. The incident occurred at approximately 6:48 pm on Thursday. “Do not make conjectures, by virtue of what is happening on the northern border, and try to link it to this event,” the Minister requested in an interview on Channel One.

He added that “there are two or three hypotheses that are being handled in this moment”. “We are investigating the causes of explosion of the vehicle on the Riobamba-Colta highway, since yesterday there have been technical tests, and at the moment there is no indication that it is related to what happened at #SanLorenzo, no conjecture should be made, until we have official information.” , @navasveracesar

The Minister announced that “presumably the characteristics to whom the vehicle belonged and who was driving it have been determined”. Navas said that the Ministry will report on the event during the morning and afternoon of Friday, “once we have official information, verified and that we have all the indications of why the explosion occurred.” At the moment investigations are carried out.

“There are the specialized units of the National Police, of the Judicial Police since yesterday night doing all a technical skills work to determine the causes of explosion of this vehicle,” said the head of that State Portfolio. He also said that one person died because of the incident. “The identification tests of the person are being done. Some checks have been made with relatives of the person, to see what routes he was covering, where the vehicle was from and so on. ”

The vehicle that exploded is totally disintegrated, according to the Minister. “We found parts of the engine and so on. Imagine that there are remains of the vehicle almost 400 meters from the place of the explosion. ” As part of the inquiries said that “we are seeing the issue of the route, where this vehicle came from, where it was going. We are analyzing the story, the judicial past of the person who was there and also certain links that could have “. According to a preliminary report from the National Police, “part of the molten vehicle and parts of extremities of human beings were verified in the place. The explosion had a magnitude of approximately 500 meters. ” (I)

Platform to position MSMEs is enabled in Ecuador