Japan has 1,000 Replicates of the Earthquake 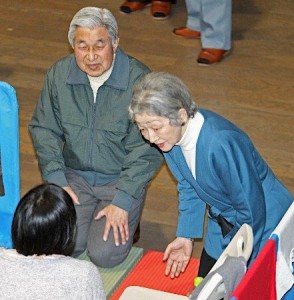 The Japanese Emperor and his wife have visited this Thursday those affected by the earthquake and the tsunami. Emperor Akihito and the Empress Michiko visited a shelter in the Asahi district, the imperial couple traveled through the blighted region accompanied by the Prime Minister Naoto Kan, whose unpopularity continues to grow.

The opposition’s main party requested this Thursday that Kan is removed from his office due to his poor performance in the triple crisis that Japan is suffering. The people are on the edge since several replicates of the earthquake continue, along with the constant threat of news that arrives from the Fukushima Daiichi nuclear plant.

This week the authorities increased the radioactive danger level to 7, which is the same that Chernobyl has. The threat that the fuel bars in reactor number 4 continues to instill fear in the Japanese population.

Patiño: “We Have More Than 190 Countries with Which We will keep Conversations”