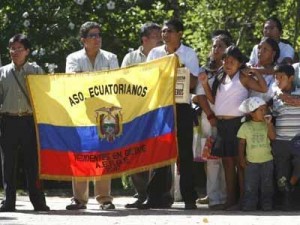 Over 185,050 Ecuadorian immigrants in Spain are without work, while some 47,000 of them collect their unemployment check. It is unknown how the 138,000 remaining Ecuadorians survive. The statistics of the Ministry of Labor and Social Security informed that the Ecuadorians in Spain have been affected due to the lack of construction work.

According to Raul Luna Martinez, president of the Asociacion de Ecuatorianos Perla del Pacifico, located in Palma de Mallorca, many of the Ecuadorian immigrants income comes from construction works.

Alfredo Cedeño, president of the Association of Ecuadorian Entities in Cataluña stated that many Ecuadorian immigrants could end up living in the streets as homeless. Cedeño also commented that he has been unemployed for more than a month.

Meanwhile Javier Pedreño, one of the founding members of the Association of Ecuadorian Entities in Cataluña, believes that many Ecuadorians are working without a contract. Some could be earning a living by cleaning houses, buildings or working in transportation.

Wikileaks: Irruption from Colombia’s guerrilla is due to military and political corruption in Ecuador