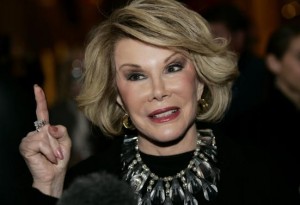 Joan Alexandra Molinsky, the real name of Joan Rivers, was a scathing comedian, who made her way into the world of night shows, until then dominated by men. She was also known for her criticism of the badly dressed celebs, and her multiple plastic surgeries.

Rivers, 81, died last Wednesday after being in intensive therapy due to a cardio respiratory arrest while being subjected to surgery of the vocal cords. Her daughter, Melissa, told the media that her mother died surrounded by her loved ones. At the moment, the future of Fashion Police, the E! TV space where the hostess worked, is uncertain.