Juan Manuel Santos runs for the reelection in Colombia 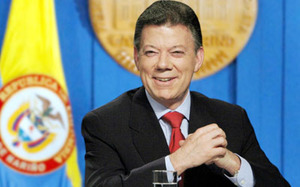 Colombian President Juan Manuel Santos, received yesterday the support from political forces loyal to his administration to seek re-election in next year’s elections. However, his opponents criticized the ruling on issues like peace, education, health and employment.

Newspaper El Tiempo of Bogota published an article yesterday about the three years of the Santos administration. It discussed the Victims and Land Restitution Act, which is one of the greatest legacies of President. Currently the number of victims registered is 5.6 million and expect to attend all before 2021.

Maybe his second greatest achievement is the current peace process with the FARC, which is also recognized worldwide. This continues to be a challenge since it advances slowly.

Finally, a major achievement of the leader is the reduction of poverty in the country, which went from 37.2% to 32.7% in August. Currently Santos should correct the flaws that throw a financial lifeline to hospitals, by the law 1438 of 2011.

Emelec seeks the crown on resumption of championship