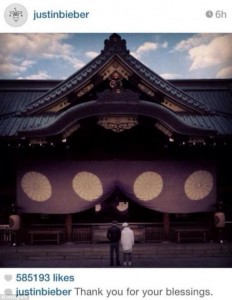 `Thank you for your blessings´ was the phrase with which Justin Bieber posted a photo on his Twitter account, which is linked to his Instagram account. The photograph shows his visit of the Japanese temple Yasakuni , which honors Japanese soldiers of the Second World War II, who are considered war criminals, causing negative reactions in China and South Korea, where the shrine represents the Japanese imperialism.

Following negative reactions, 13 hours after, Justin Bieber posted on his Instagram account: `When I was in Japan, I asked my driver to stop at a beautiful sanctuary. I was wrong to think that the shrines are only places of prayer.  Whom I might have offended, I’m sorry. I love China and I love Japan´.

This event marks other episodes, such as when he visited the Anne Frank Museum and wrote in the guestbook: `It was very exciting to visit the place. Anna was a great girl. Hopefully she would have been a belieber.´