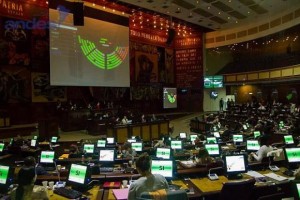 The package of reforms to the Law of the Armed Forces Staff was approved on December 22 in the National Assembly with an additional transient: that the aides-de-camp who were designated under the current law will remain in office until the end of the period they were appointed.

The new section, which was adopted with 91 affirmative votes and 25 negative, suggests that the military rank and classification will be awarded to all officers by ministerial agreement; and enlisted personnel by their respective commander general. Currently, this is done through executive orders.