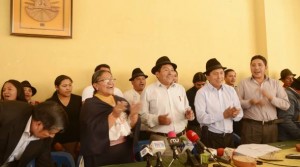 As part of the “state of emergency” in which it declared itself last week, the Confederation of Indigenous Nationalities of Ecuador (CONAIE for its Spanish acronym) made this December 23 a general assembly at its headquarters, which was claimed by the Government through the Ministry of Economic and Social Inclusion (MIES for its Spanish acronym).

This emergency includes permanent meetings in the communities, peoples and nations until “the conflict situation created by the eviction order is resolved,” states the document signed by the president of CONAIE, Jorge Herrera.

The meeting is scheduled for 09:00 and, according to officials, measures will be taken to ‘defend’ the rights of communities, peoples and nations and those of their ‘historical’ headquarters.

CONAIE declared its headquarters as heritage of indigenous peoples