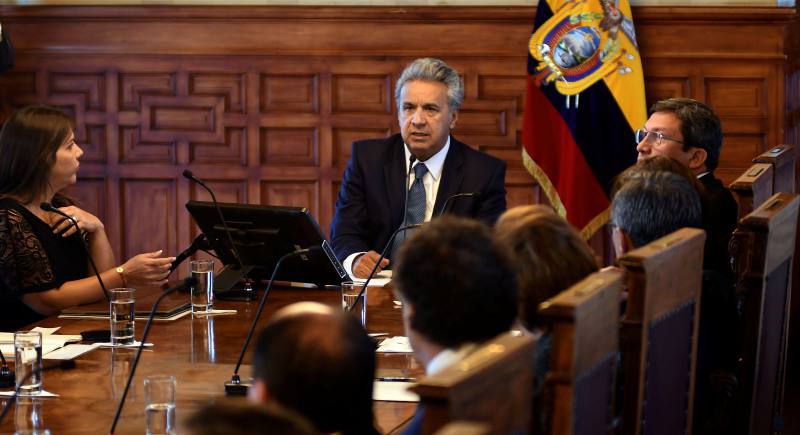 Before the meeting of the Public Safety and State Council (Cosepe), President Lenin Moreno gave a description of the current situation on the northern border and noted that there has been permissiveness and dismantling of the Armed Forces and the Police. This meeting analyzed the kidnapping of the newspaper team of El Comercio newspaper, in Mataje.

“The extreme permissiveness is what has allowed this (kidnapping and more attacks) to occur and, of course, the moment in which one allows everything to these guerrillas and drug traffickers, is practically giving the possibility that they do what they want , but when they are subtracted, they are prevented, their possibilities are cut off so that they can transport the narcotics in the way they had been doing, because at that moment their response can also be forceful, but more forceful is our response “Moreno specified.

Regarding the Army, Moreno explained that the operation of the Armed Forces has been reduced and he gave some examples: the purchase of helicopters that fell, the purchase of radars that did not work, the purchase of old planes that cost more for repairs than buying them .

The president offered to provide everything needed by the Armed Forces, the National Police and the Department of Investigation, Security and Intelligence, which will replace the National Intelligence Secretariat (Senain).

The meeting of the Public Safety and State Council (Cosepe) lasted about two hours at the Carondelet Palace. There it was decided to extend the state of emergency for the San Lorenzo and Eloy Alfaro cantons, border area of Esmeraldas with Colombia, for one more month. Also, through an Executive Decree a National Border Integral Security Committee was created.

The northern border, especially in Esmeraldas, suffers the consequences of what happens in the department of Nariño, in southern Colombia. Reports from Colombia mention that there is the largest area planted with coca, the raw material of cocaine. In addition, it is a strategic point of the Pacific route to transport drugs to the United States via Central America and Mexico.

“In that area, 12 small groups are fighting over control that the FARC had before. A criminal resettlement is being experienced, and that violence has also happened on Ecuadorian soil, “Ariel Ávila, an expert in the Colombian armed conflict of the Peace and Reconciliation Foundation of Colombia, told AFP.

In Ecuador, the calls to improve control multiplied after the kidnapping of the journalistic team.

“Terrorism, murder of public officials (including women), kidnapping of journalists … Against that, condemnation, indignation and solidarity. But I insist, until when? Jaime Nebot, mayor of Guayaquil. (I)