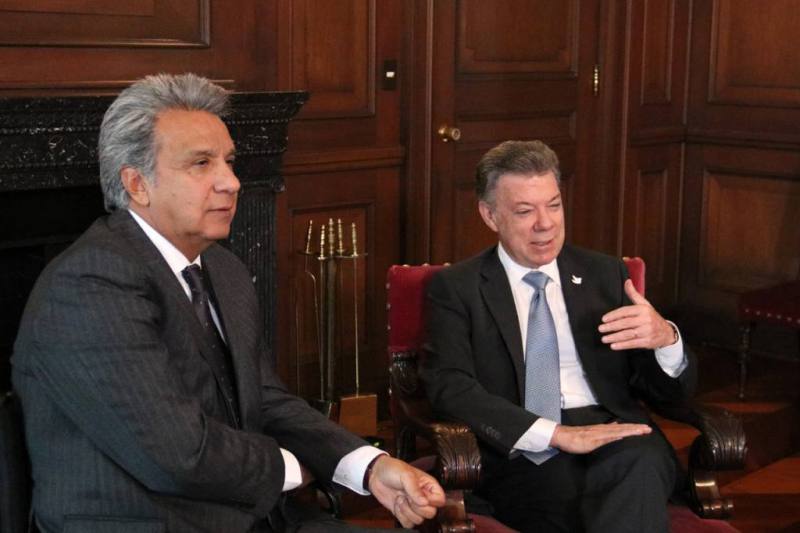 Ecuador resigned yesterday to continue hosting the peace dialogues between the Colombian government and the ELN guerrillas, which were advancing in Quito. On the other hand, at the military and police level, an alliance was sealed yesterday in the fight against narco-terrorism and illegal armed groups, when the general commander of the Ecuadorian Police, Ramiro Mantilla, and other chiefs participated in joint operations in Tumaco, Colombia , with military commands from that country.

In an interview with the Colombian television channel NT24, in Carondelet, President Lenin Moreno announced that he had asked Foreign Minister María Fernanda Espinosa to inform his Colombian counterpart that Ecuador suspends its status as guarantor of peace talks.

“The decision will remain as long as the ELN guerrilla continues carrying out terrorist activities,” according to a subsequent official statement issued by the Secretariat of Communication (Secom).

This is a direct consequence of the series of attacks promoted on the northern border by narco-terrorist groups, including the Oliver Sinisterra Front, commanded by alias Guacho, which operates in southwestern Colombia. Also, of the bombing that killed four members of the Navy, of the kidnapping and murder of the three members of the newspaper team of El Comercio newspaper and of the kidnapping of an Ecuadorian couple last week.

In the interview with NTN24, Moreno argued that, apparently, there was a “tacit agreement not to bother each other”, referring to organized crime and security conditions in which the previous government received the northern border.

The president said that he feels guilty for omission, having been part of the Correa government and not paying attention to economic aspects that “frankly did not interest me”.

He announced that he will open an investigation against Rafael Correa because he allegedly received money from the Revolutionary Armed Forces of Colombia (FARC) and asked to investigate the veracity of the video in which there is alleged evidence of an alleged financing of that organization to the campaign of the former president. “I always thought that they could be lies, slander,” the president said.

For his part, Rafael Correa said in his Twitter account: “Have you heard that it was also his campaign?”, Referring to Moreno.

He justified continuing to have former Correa ministers in his regime, such as the Interior Minister, Cesar Navas, and Foreign Minister Espinosa. He said that they are people with experience, but: “We all have the right to recognize that there have been mistakes and to turn things around, there is always the possibility of changing the past.” And he said that if he does not have conclusive results within the ten days he gave, he will ask them to “step aside”.

The president admitted that mistakes were made in the case of the kidnapping of journalists. He affirmed that he was negotiating, that he had yielded to the exchange of the journalistic team by three members of the band commanded by alias Guacho, “for that one time”.

“He failed to trust that the criminal’s word had value, now that I see it clearly he never intended to deliver our brothers alive. I believe that what I was doing is gaining time to consolidate more, territorially, its power, “Moreno said. (I)