Lenín Moreno moved the Government to Guayaquil; reaffirms his position on economic measures

The president of the Republic, Lenín Moreno, announced on a national network that he moved to Guayaquil.

“I have transferred the seat of Government to this beloved city, according to the constitutional powers that fall within my competence,” he said. 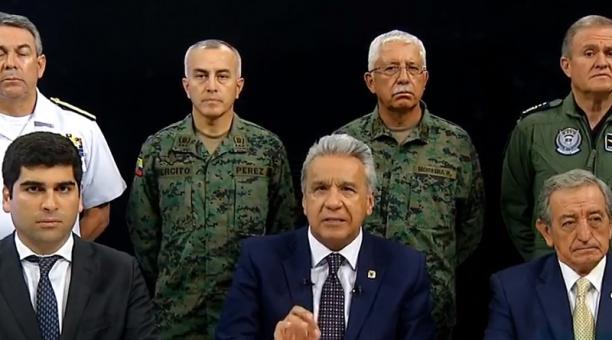 Lenín Moreno moved the Government to Guayaquil; reaffirms his position on economic measures

In a statement next to the military command, in which Vice President Otto Sonnenholzner is also present, the Prime Minister said that the mobilization day that the country has lived since last Thursday, October 3, 2019, “is not a manifestation of discontent.

Looting, vandalism and violence show that there is an attempt to break the democratic order. ”

“The most violent are external, paid and organized individuals. Is it a coincidence that (Rafael) Correa, (Ricardo) Patiño and (Paola) Pabón traveled to Venezuela a few weeks ago? Mature, activated along with Correa, its destabilization plan (…)

They are the ones behind this coup attempt, ”said the head of state. The President thanked “the commitment” of the Armed Forces and the National Police against the demonstrations.

From the Government, we will continue to protect the integrity of citizens (…) Violence and chaos will not win, ”he said. “I am not going to back down because the right thing has no nuances (…) The elimination of the fuel subsidy is a historic decision. It ensures that our economy is healthy and dollarization is protected, ”he added in the national chain.

“I call the social sectors to fraternal and sincere dialogue, a door that has never been closed from the Government,” he concluded.

Intendance controls prices in the market