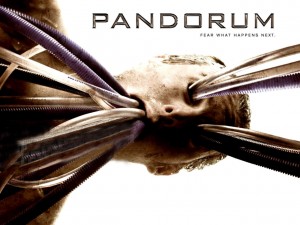 Director Christian Alvart (Antikorper, 2005; Case 39, 2009) brings us a new vision of Sci Fi horror movies with Pandorum. However the film atmosphere promises much. After an hour an half of footage the viewer is inmersed in a compelling setting that catches its attention.

The main theme is the psychological terror, but the story tends to be more physical, with foot chases, trembling cameras among others. This elements combined with a claustrophobic scenario have a strong impact on the audience.

Pandorum is the nightmare of two crew members aboard the spaceship Elysium, who after waking up from their hyper dream suffer from amnesia and cannot remember what exactly is their mission. Soon they discover cannibal creatures that hunt them for their meat.

The film has offers some of the best are the sound effects, the hibernation period and the waking up moment. However the film never ceases to surprise the audience because of ambiance and the performances of Dennis Quaid and Ben Foster. The movie is entertaining and leaves several questions: where do the monsters come from? What really is Pandorum?

Those fans of the genre do not worry since the director promised a prequel and a sequel if the film obtains the desired success. The future releases would explain what happened to the Pandorum universe. (AV)