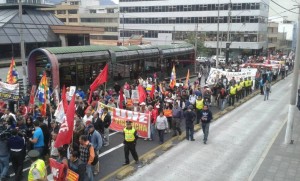 Yesterday afternoon dozens of citizens gathered in the Social Security office to insist on the file of constitutional amendments and the release of those detained during the protests in Quito and Saraguro against the government of Rafael Correa.

From 16:30, the protesters gathered _ the main office of the Ecuadorian Social Security Institute (IESS), and then marched towards the Attorney General’s Office with the president of Ecuarunari, Carlos Perez Guartambel; the prefect of Zamora Chinchipe, Salvador Quishpe; Tatamuez Messiah, president of the Cedocut, among other leaders.

“We want freedom for our comrades who were illegally detained,” chanted the protesters who marched peacefully to the Attorney General´s Office, located at the Patria and 12 de Octubre avenues.