Mariela Viteri Talks About Her Departure From TC 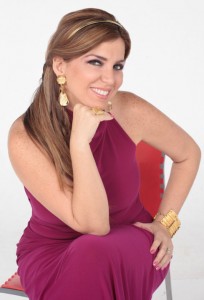 Mariela, who enjoys singing and has released six Christmas CDs featuring nationally recognized artists, resigned to the TV channel on December 2010 and afirmmed that everything ended in good terms.

She explained that before leaving the channel, she had requested the program to air again on Wednesdays–just like at the beginning of the show–that way she could go live, but since the program began airing on Saturdays, she had to start recording it because she dedicates weekends to her family. “I do not manage ratings and I do not know if I won or lost points. I went for it. What they were doing was not what I wanted, but I was always open to dialog. I’m eager to talk not only with TC but with other TV channels,” she said.

The TV presenter confessed she has spoken with other stations, but she has not reached an agreement yet. She has decided to put a pause to her 22-year television career.

At the moment Mariela is dedicated to her children, Marielita and Ricky Mortola, and her two companies, radio fuego and Mariela magazine. Viteri will make a guest appearance in the second season of “Así somos” broadcasted by Ecuavisa, on February 14.

Smoking in Public Has Been Banned in New York