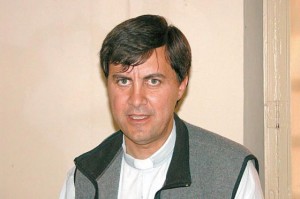 The Catholic priest Eduardo Cordova is accused of abusing at least 20 children. This is the latest case of pedophilia in the Mexican church. The Vatican has already removed the Catholic priesthood to Cordova but he is hidden with a record in the prosecution.

The Congregation for the Doctrine of Faith has imposed to the cleric the “dismissal from the clerical state,” according to declarations from the Holy See to Notimex, the news agency of the Mexican state.

The Church began investigating this case since a victim of the priest in 2012 went to Rome to report his case and presented the evidence of the accusations.

The final determination, of expelling Cordova from the Church, was published this week, once the Roman curia concluded the investigation of pedophilia.

The cases of abuse by this priest date from 1985, when he was not yet a priest and taught social studies in a high school.

Last April 23, the Potosí diocese attorney Armando Martinez acknowledged that Cordova had been defrocked. “He does not belong as a priest to the Archdiocese of San Luis Potosí. Nor are we the Inquisition, we leave in the hands of the State to act and do what they have to do, “he said.