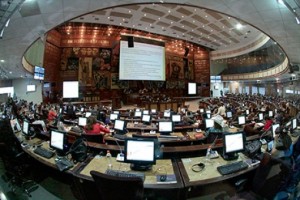 “The non-privatization” versus the “de-privatization” was the topic of discussion in the plenary of the Assembly yesterday in the second debate of the Water Act.

Carlos Pérez Guartambel, President of the Ecuarunari, opened the debate and said that possession of water in the country shows that only 1% of private properties concentrate the 64% of total water flow and therefore it is necessary to “de-privatize” the liquid.

In this regard, Rapporteur for the draft and President of the Committee on Food Sovereignty, Miguel Carvajal (of the Alianza PAÍS AP party) noted that arises as a widespread consensus “banning all forms of privatization.” He also said that everyone is interested in a review and an equitable distribution of water. “It can not be possible that the hoarding of water remains,  Senagua has the obligation to raise the inventory which I understand is already done,” he added.

Luis Fernando Torres (PSC-Cambio party) said that with the general provisions contained in the draft the public deeds of irrigation water that have titles could be in limbo and if ther payment or the obligation to redeem it for certificates occur, trials for infringement of rights could be held.

Regarding general provisions, Gina Godoy (AP) noted that the existing private management becomes public or community. “That is a task of this law, there can be no private concessions.”

During the discussion, Gabriela Rivadeneira, President of the Assembly, requested the crowd shouting for the approval of the Water Act that to have moderation and asked the intervention of the Legislative Escort.