The Ecuadorian Filmadora Sociedad Anónima was a national company dedicated to producing films with the Mexican executive Alberto López . 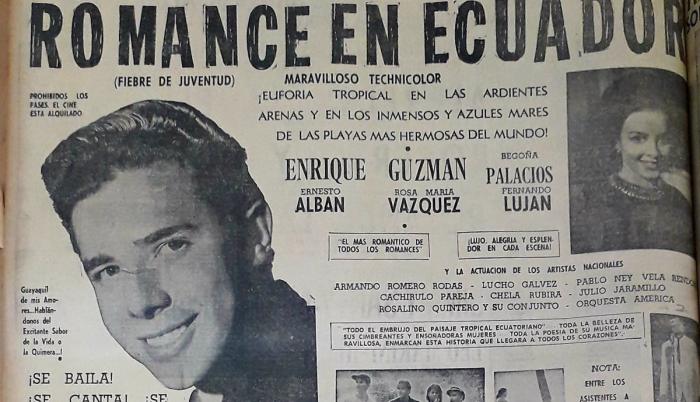 Many of the plots were written and directed by R ené Cardona Jr. , back in the 1960s. EXPRESIONES remembers some of these films that had locations such as Guayaquil, Salinas, Playas and Punta Carnero and had the greatest stars of the time.

Enrique Guzmán starred in this film, also known as Youth Fever, along with Fenando Luján, Rosa María Vásquez, Begoña Palacios and the Ecuadorian Ernesto Albán . The film, with a special appearance by Julio Jaramillo, narrated the adventures of two musician friends who not only try their luck in Ecuador, they also fall in love.

Sean Connery was the most classic James Bond, Latin America had its own version. We are talking about Julio Alemán , who gave life to agent Alex Dinamo. As expected, the plot could not be more original. A group of beautiful women are agents of the intelligence service and fight against a criminal organization, among them, the sensual Ecuadorian Toty Rodríguez.

The beautiful Elsa Aguirre characterized a woman who, tired of her husband being unfaithful to her, decides to kill him. To do this, he tries various options, but he gets into many problems. Julio Alemán and Pedro Armendáriz Jr. were in the leading roles.

The seducer of the moment, Mauricio Garcés , recorded this tangled comedy in Guayaquil, next to a cast of luxury made up of Joaquín Cordero, Silvia Pinal, Ofelia Montesco and Carlos East . The plot featured a couple of ex-boyfriends feeling dissatisfied with their current marriages and planning a one-day reunion.

Talking about Alberto Vásquez, César Costa and Enrique Guzmán was as if we were referring today to Cristian Castro, Luis Miguel and Alejandro Fernández. Can you imagine putting the three together in a movie? Well, the Salinas spa served as a location for these singing friends who were looking for fun, fame and money. They know many girls, but only one catches their attention and it is there that their friendship is in danger.

Coronavirus in Ecuador: $ 53.54 million estimates Health for supplies and medications