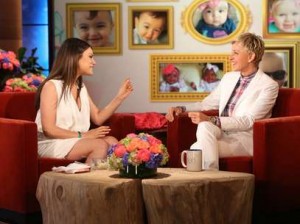 In the interview, the actress did not give details of the sex of the baby or the date of birth

In the Ellen Degeneres Show, the Ukrainian actress Mila Kunis confirmed her pregnancy and wedding plans with actor Ashton Kutcher for the first time to the media. DeGeneres congratulated her for having kept secret the pregnancy news for a while, to which the actress also expressed surprise.

The actress refused to give details on when will be the birth of the baby, or the sex, because she and the father´s baby want to keep it private until the birth, likewise, she did not reveal the baby’s name. Kunis said she meets that the common pregnant woman profile and she eats chucrut all day.