Mono Jojoy Was Buried Alive in his Concrete Bunker

Military Forces Commander informed this Monday that Jorge Briceño, A.K.A. “Mono Jojoy” died after being crushed in a bombing, the structure where he was hidden in the jungle fell all over him. 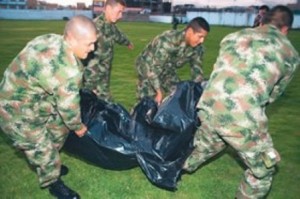 “We know he died in a crush, his bunker fell all over him,” said Admiral Edgar Cely, in an interview with Caracol Radio  “He wasn’t shot in the head, that’s a lie.”

Seven bombs exploded in Jojoy’s hiding place, he was 57 years old. Cely also mentioned that Jojoy, whose real name was Víctor Julio Suárez, had between 1,000 and 1,200 guerrilla men with him, but only 24 took care of his personal security.

Military Forces Commander said it took years to finally track down Jojoy who was hidden for several days in the camp settlement where he was beaten.

He also added that 15 computers and 98 flash drives were confiscated, according to General Oscar Naranjo, the information is 11 times more valuable than the one that was taken in March 2008 when chief of FARC, A.K.A. Raúl Reyes, was found in Ecuadorian territory.

Cely affirmed FARC terrorists betrayed Jojoy, but he doesn’t now how much money they got paid as a reward. Apparently FARC is falling apart.