More armaments are found in Sucumbíos 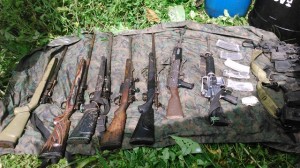 War Weapons found inside a plastic tank in the area of Villa Hermosa, along the San Miguel River in the border area of Sucumbíos.

The Armed Forces, through military from the Operational Command No. 1 “North” (CO1), made ​​a new operating control, which found military weapons, explosives and equipment.

The discovery was made in the area of ​​Villa Hermosa, along the San Miguel River in the border area of ​​Sucumbíos, between 26 and 27 October of this year.

According to a statement of military intelligence, in a plastic tank were found: a Bus Master rifle, an AK 47 rifle, five rifles, one hand Granada, 5 feeders loaded with 5.56mm ammunition and one suspender. The material was delivered to the competent authorities of the province for the law proceedings.

Earlier, in the Barranca Bermeja area, also on the banks of the San Miguel River, the Armed Forces localized ordnance, intendancy clothing and communications equipment, which “presumably were going to be assigned for members of illegal armed groups of Colombia (GIAC)”. There, two people were arrested by alleged involvement in the crime of firearms trafficking. The suspects could face jail terms of between seven and ten years.

Similar weaponry was found last week in a truck on the Quito-Lago Agrio road (Sucumbíos), which was going to serve as an escape vehicle after the assault of two armored vehicles of the Vaserum company, carrying $ 3.7 million. The suspects used explosives, assault rifles, machine guns and an anti-aircraft gun to commit robbery, according to statements from the Interior Ministry.