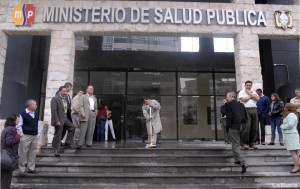 The Society against Cancer (Solca for its Spanish acronym) and the State will receive the 0.5% that will be charged to loans obtained in entities regulated by the Superintendency of Banks, including credit cards (which represents approximately $122 million per year).

President Rafael Correa, said that the Ministry of Health is the lead entity for health and that it, in coordination with Solca, will be responsible for delivering the funds.

“Taxes are not owned by anyone and only the state can set taxes”, said Correa when asked about the resources Solca will receive from this tax in a discussion with the media this Tuesday in Guayaquil.

Marisol Ruilova, Deputy Minister of Health, said that Solca will be in charge of the third level of oncological diseases, which need specialized care, and the Ministry of Public Health will take care of the prevention stage.

Ruilova reported that Solca´s allocation will remain at the same levels, but in addtion, the Ministry will purchase services to Solca.