Naomi Cabrera was Elected the Queen of the Carnival 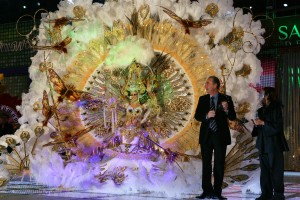 After the longest carnival history gala, which lasted nearly four hours, the final choice among the 17 candidates was Naomi Cabrera. Her name will be related to the title of the Queen of the Carnival, thanks to fantasy “A hundred years of history.”

Fabiana Vera will accompany her, as first lady of honor, Sonia Hernandez, as the second; Idaira Gonzalez, in the third possition, and Naomi Corder, as fourth lady.

Until March 9, Brazil will dress with colours his people with the carnival celebrations that are increasingly becoming one of the most majestic and multitudinous shows worldwide.

The streets were the stage where more than 450 “blocos de rua”, schools, and groups marched the  samba beat  in this celebration of the festivities. People are preparing for the next parade of  ‘schools ‘ in the legendary Rio sambódromo scheduled  for this Monday.