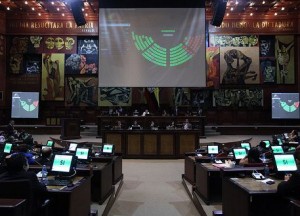 The plenary session of the National Assembly will have tomorrow the first debate of the Organic Law of the Public Electricity Service.

The unification of electricity tariffs for users, is among the topics contained in the project, which was submitted by the Executive and studied by the Committee on Economic Development.

Unification of subsidy rates, the rate of Dignity, and government coverage of the subsidy for elderly and those affected by natural disasters are the topics included.

The Article 60, which eliminated from the electric bill a Fire Department fee, proposed by the Executive, will not be included in the report which will be debated today as reported in a statement by the National Assembly.