NATO Will Lead the Military Mission in Libya 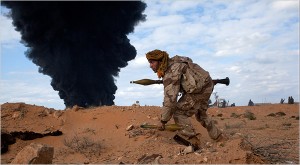 The North Atlantic Treaty Organization (NATO) will take command of the military operation in Libya next week. The agreement was reached after a call made by the State Secretary of North America, Hillary Clinton, and her counterparts from the United Kingdom, France, and Turkey.

This Thursday was the sixth day of the Dawn Odyssey operation that focuses on a series of air attacks performed by the allies France, United States, and the United Kingdom who promoted the use of force to respond the violence of the supporters of the Libyan leader, Muammar al Gaddafi, who has attacked his population for almost a month.

The civil war in Libya began last February when the opposition protested against the regime of Gaddafi by demanding his resignation, since he has been power for 42 years.

NATO Gives 90 Days to the Air Exclusion in Libya