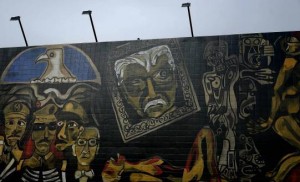 The Mayor of Guayaquil, Jaime Nebot, showed his total rejection by the location of the figure of the late President of Ecuador, León Febres Cordero, alongside the American former dictators in a mural exposed on the outside of the General Attorney in Quito and inagurated last Wednesday.

“The ability to hate and the sectarianism never ceases to amaze me. First, Febres Cordero was no a dictator, nor was a military. Febres Cordero was a man, democratically elected President by the Ecuadorian people. He was no judicially convicted BY violation of human rights. There are people who attacks him, there are people who defends him; no condemnation” Nebot said on Friday, December 12 during a tour of his works in northern Guayaquil.