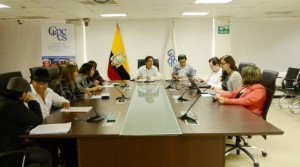 Carlos Tayupanta Noronha was positioned as the first best rated to occupy one of the two seats at the National Electoral Council (CNE for its Spanish acronym), which is in the process of partial renewal. The second place in the organism was for Gloria Toapanta López.

The Citizens Commission on Selection of these new officials approved on December 12 the requalification report of the exam 35 opposition candidates yielded.

Six people made the request to review their score, but only four were allowed to do it. Including that of Tayupanta, who rose from 95 to 96 points (out of 100); while Toapanta, who had no additional point is in second place with 95 out of 100.

Their alternates shall be Solanda Goyes, who managed with the requalification to upgrade two points more and went from 86-88 to 100 (she is the third); and Mónica Rodríguez, who also requested requalification and rose 84-87 of 100 (ranked the fourth place).