Negotiation proposal by the EU is accepted by Cuba 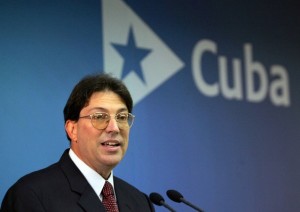 The Minister for Foreign Affairs, Bruno Rodriguez, said today that Cuba “welcomes” the proposal from the European Union (EU) to begin negotiations for a Political Dialogue and Cooperation.

“We have just let know that decision to the EU Ambassador in Cuba”, said Rodriguez in a press conference performed at the headquarters of the Chancellery in Havana. The Cuban minister considered that the position taken by the European bloc ends the way of the “unilateral policies.”

On February 10th, following a consultation process, the Ministers of Foreign Affairs of the EU, gave their approval to the directives for the future negotiations process with Cuba.

That same day, the head of European diplomacy, Catherine Ashton, sent a letter to the Cuban Foreign Minister inviting him to start the dialogue.