Nelly Furtado Will Donate The Money Gaddafi Paid Her

Canadian singer Nelly Furtado has decided to donate the money that Libya President Muamar Gaddafi paid her for performing at a hotel.

“In 2007, I was paid 1 million $ by the Gaddafi clan to play a 45 min. show for guests at a hotel in Italy. I am going to donate this $,” she tweeted. However, Furtado’s tweet was deleted hours later.

Beyonce and Mariah Carey have also been paid by Gaddafi for singing their songs in New Year’s parties–2009 and 2010–celebrated in San Bartolome island. In fact, Mariah received a million dollars just for performing four songs.

Nelly has not revealed what institution would receive the money she will donate. 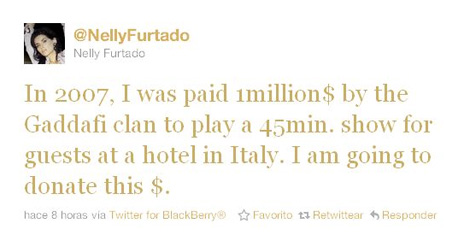