Four Members of ETA are Detained in Vizcaya 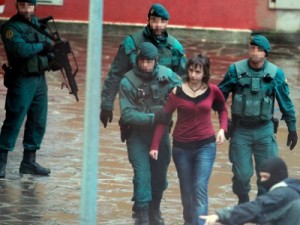 In the province of Vizcaya, the Civil Guard gave a hard blow to the ETA during this morning. The agents apprehended four unknown members of ETA and also registered three houses in Bilbao and another one Galdakao. In the households the officers discovered and seized 200 kilograms of explosive material. The detained are Lorena Lopez Diez, 31; Iñigo Zapirain, 34; Beatriz Etxeberria Caballero, 33; and one Daniel Pastor Alonso, 37.

The apprehended terrorists could be the responsible for the murder of the police inspector Eduardo Puelles in June 19, 2009, in Arrigorriaga, Vizcaya. The inspector was the last victim of the terrorist group in Vizcaya. Puelles became notorious after he led an operative that apprehended 70 members of ETA.

Thanks to detention of the former military chief of ETA, Mikel Kabikoitz Carrera Sarobe, a.k.a Ata. Due to the documents seize, a decisive moment to end the violence of ETA.

The terrorist group made this announcement and expressed his rejection on terrorism by the new socialist party, the Sortu. However, the arrests reaffirmed that the ETA has not ceased its attacks. (AV)