New authorities of University of Guayaquil were appointed 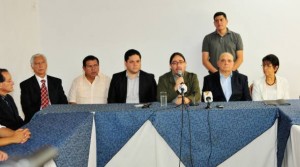 With police custody within the University of Guayaquil, the College Board´s session was held yesterday. With 46 votes in favor and 2 abstentions, Roberto Cassis was appointed Rector in charge. Sonia Ordóñez as an academic Vice-Rector. César Muñoz and Alfredo Govea will be in charge of the General and Administrative Vice- Rector, respectively. All of them, proposed by Carlos Gomez, Dean of the Faculty of Medical Sciences.

The new authorities will be in office until January 27, 2015, date on which the University Council will meet to set the date of the call for university elections.

Cassis, the new Rector, is Professor of Obstetrics at the Faculty of Medical Sciences. “We have to achieve a better accreditation than the one we have obtained and that we will do it along with its authorities, Professors, and unquestionably with the students”, Cassis concluded.

Users of the 4×4 system for imports accelerate their shipments