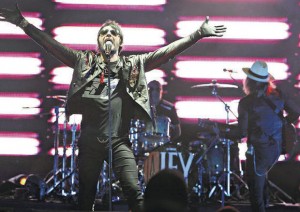 The group sang 20 Tracks, in which the stage management and music power were reflected

Last Saturday, in the Agora of the House of Ecuadorian Culture in Quito, after nine years of absence, the iconic Chilean band, La Ley, was presented before 1500 people. Beto Cuevas, lead singer, opened the show with the following statement: `We are the Law, and we are back.´

The concert was characterized by the effusiveness of the public, and the handling of stage and musical power of the group.The band sang 20 Tracks, giving a preliminary introduction, explaining the significance of each song. Cuevas presented his new song ‘Olvidar’, which he described as nostalgic for the trajectory and the moments of the group, which was created in 1988.