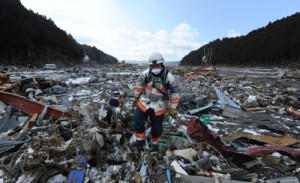 An official of the Nuclear Safety Commission in Japan informed that the nuclear threat has increased from 5 to 7, the highest number in the international scale. The official, whose name was not made public, revealed that the quantity of radiation being leaked by the Fukushima Daiichi nuclear plant is the 10% of the Chernobyl disaster.

The level 7 is the meaning of a big accident with grave consequences. Minoru Oogoda, from the Nuclear Security Agency and Japan Industry (NISA), revealed that the radioactive leakage have spread through the air, vegetables, drinkable water, and the ocean.

Recently the evacuation zone near the broken nuclear plant was expanded yesterday due to the high radioactivity levels detected. The government announced that because of the accumulation of radioactive contamination encouraged several people to leave the affected areas.

The last couple of days have been shook by several replicates of earthquakes with 7 degrees in the Richter scale. This new disaster occurred after a mourning ceremony of the 25,000 victims of the tsunami and earthquake of last March 11.

Mubarak and Sons are Arrested