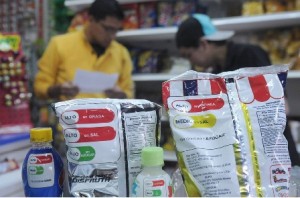 In late 2013 the nutrition label on food products was implemented, which could have generated a change in the habits of people, experts say.

The label shows the red, yellow and green colors to define high, medium or low levels of sugar, fat and salt.

Multinationals such as Coca-Cola have introduced new versions of the classic drink sweetened with stevia and changed the red color of the label by a natural green, something that does not look like a commercial whim.

For marketing experts, there is a growing public interest in seeking healthier products and this has made large companies around the world committing to respond to these needs.

Cerveceria Nacional (National Brewery Company by its Spanish name) invested $ 2 million in equipment to extract alcohol from the drink and placed in the market of healthy products its beer Pilsener Zero.

A CN spokesman summed up the company position: “To be pioneers and leaders in the market we must evolve to a greater pace than that of consumers,” which shows that large companies are not willing to give ground.

6 months ago the Transnational company Ambev, producer of the Brahma beer announced the placing on the market of Maltin, a drink made from malt low in sugar, fat and salt, aimed at children.

Changes in requirements for US visas

4G mobile system will be accesible from now