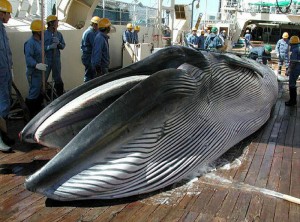 Whale meat is very popular in the Japanese market

The International Court of United Nations (ICJ) on the occasion of whaling for scientific purposes in Japan, argued that the country “has violated its obligations under Article VIII of the International Convention for the Regulation of Whaling Whale (1946) “.

In 1972, the UN Conference on the Human Environment established a sane where sustainable fishing (which is still in force), but came into effect between 1985 and 1986 , and was ignored in the beginning by Japan. Later, Japan took in scientific studies to continue hunting whales. Whale meat is highly prized in the Nippon market, hence, both Australia and environmental organizations have denounced this fact.