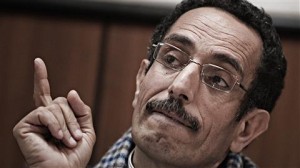 United States blocked $30,000 million of assets of Libya, and also plans to mobilize naval units into the coast of the country to pressure Muammar al Gaddafi to leave the country. The leader of Libya is entrenched in Tripoli and neighboring cities with the support of guerrilla soldiers along with mercenaries and paramilitary groups of the regime who are better equipped than the army.

According to a report of the North American network ABC, Gaddafi does not recognize the demonstrations in Tripoli and assures that the people of Libya love him and would die to protect him. Muammar feels betrayed and surprised by the UN, saying that they abandoned him in his fight against terrorism. Yesterday the pentagon informed that naval forces are around Libya and that the west plans a military intervention against Gaddafi. The U.S. Armed Forces have a regular presence in Libya with the Fifth Fleet in Bahrain.

Meanwhile the opposition rejected any military operation from foreign supporters claiming that this measure would remove any credibility for their future. The insurrection was composed last Sunday with “National Council” made by the “free cities.” The spokesman of the rebellion, Abdelhafez Ghoqa also rejected any foreign military help.

The European Union (EU) started an arms embargo against Libya as well as the freezing of its assets as well as the prohibition of visas for Gaddafi. The Security Council of the UN approved this sanction last Saturday. According the General Secretary of the United Nations, Ban Ki-moon, over a thousand people could have died and several hundred thousand might have migrated. Meanwhile Hugo Chavez, president of Venezuela, supports Gaddafi by saying that he is not aware that Muammar is a killer, however, he did condemned a military action against Libya. Chavez appealed to this possible attack claiming that the countries that are against Libya only want their oil.