Options are being considered to replace the Judicial Council 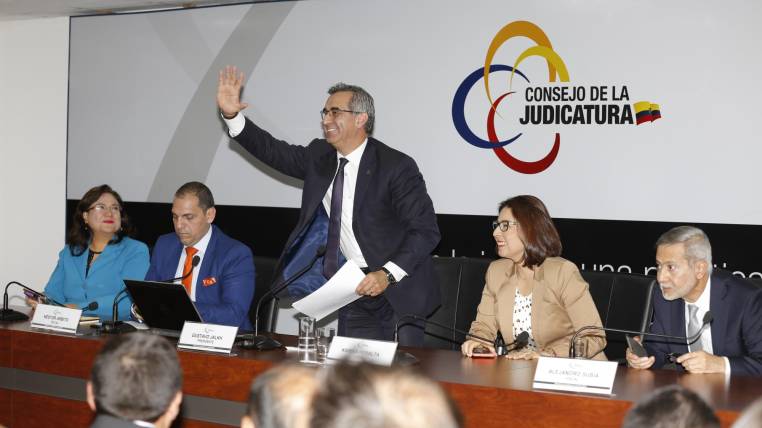 They know that they will have to leave their posts but they will fight. In a single intervention the members of the Judicial Council, dismissed on Monday by the Council of Transitional Participation, criticized the evaluation process, announced that they will challenge the result and gave an option to be replaced.

In the transitory body, created after the popular consultation on February 4, they also began to analyze the options to fill the vacancies that will remain from next week. They start from a certainty: there will not be an immediate designation of the members of the Judicial Council.

Gustavo Jalkh and his colleagues still believe that, when their departure is confirmed, the alternates should assume the charges. According to the still president of the Judicial Council, they were not evaluated.

According to Luis Macas, member of the organization, the dismissal resolution reaches the principal members and the deputies of the Judicial Council. All of them were identified, among other things, by their illegitimate origin, by the evident conflict of interests and even by professional ineptitude, as reported yesterday by EXPRESO.

For Macas, one possibility is that, while the contest is being held to elect new members, only one administrative director will be appointed. The objective is for this official to take charge of the council for the next two months (approximate time it would take for Participation to form the new Council).

Macas told the media that, this time, trial people will be part of the judicial body.

Jalkh believes that what happened on Monday “is not good for the country’s institutions”. According to him, “the work of an institution has been unfairly evaluated during the last five and a half years, with only biased opinions and without an objective evaluation”.

Of course he does not have, for now, many fans of his work. Almost 800 citizen complaints were filed against the judicial council during the evaluation process. Groups and social movements support the Participation Council. Even among users of the system, lawyers for example, who support the current Judicature are in the minority.

Yesterday, Jalkh insisted that there was no surprise in the decision of the transitory Council. According to him, the resolution with the cessation of his functions “had prepared it well in advance”. He repeated that the process was a new exercise in violation of basic norms of due process. “We do not cling to any position, we are not here to defend permanence in any office,” he said. And he made one last attempt to defend his administration: he denied any interference in the decisions of the judges and said that judicial independence was always respected.

Just the opposite of what Participation says. And also the opposite of what they believe in the Assembly. The vocals of the organism, in spite of having been dismissed, will not be freed from the impeachment: they can still be censored. The accusation that persists is the breach of functions. (I)