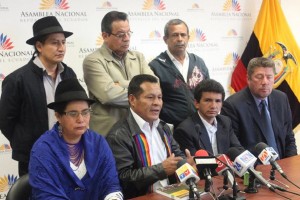 Leaders from the Pachakutik party and various social organizations from the six cantons of Zamora Chinchipe, met yesterday at an assembly to support the former Assemblyman, Cléver Jiménez, a Pachakutik member, as a result of a demand from the President Rafael Correa.

The Prefect of Zamora Chinchipe, Salvador Quishpe, presided over the ceremony, which attended the mother and wife of Jimenez, Rosa Cabrera and Rocio Alba.

“Clever is not alone, we are mindful of what happens with our partner,” said Quishpe, at the same time of exposing to the public the legal situation of the mentioned.

At yesterday´s assembly was proposed to start a public collect to get some of the money that Jimenez will pay to Correa ($ 140,000), as part of the judgment issued by the National Court of Justice on March 13th.

Quishpe presented a bull puppet that will serve as piggy, he said, and will travel several cities. “We will contribute and give the president (Correa) the money, which is what matters him most,” said the Prefect of Zamora Chinchipe.

The University of the arts starts classes with 224 students