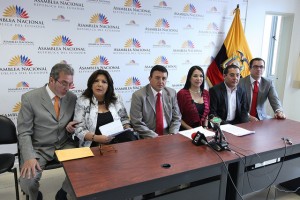 Political organizations of the Institute of Research and Policy Analysis, which is financed with 15% of the resources allocated to the Permanent Party Fund and which has received $ 4’761.416,61 over the last four years, say they have received little or no training.

Javier Santos, leader of the Frente Amplio Socialist Party says they have not received any type of training from the organism but he does know about the money that is granted for its operation. Meanwhile, John Argudo, leader of the Avanza party, said that on two occasions they have been invited to seminars developed by the Institute.

Roberto Iturralde, executive director of the Institute created in 2011, explains that during 2012 and 2013, 2,813 members of political organizations and candidates were trained in 66 workshops on constituencies, Parties Fund and strategic communication.

The activity of the institute is to promote the study of representative, direct and communitarian democracy as well as the space for technical support to the electoral role, training of electoral staff in democracy, of the political subjects and society, says its statutes.

Trade unions were concerned about possible exit from the CAN

Nebot rejects a unified consultation on the issue of transport