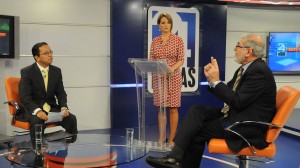 The government projected that national economy will grow 1% this year and that its ‘recovery’ will occur, “especially,” during the second half.

This was stated yesterday by Patricio Rivera, Coordinating Minister for Economic Policy, during a debate with former vice president Alberto Dahik on the Teleamazonas television set.

The two were invited to a special program on the economic situation of the country, that was broadcast live and lasted an hour.

Rivera defended the handling of the current ‘situation’ (he never used the word ‘crisis’) by the regime, and stressed that despite its ‘magnitude,’ the Ecuadorian economy continues to grow.

He attributed this to the government’s economic program and its respective investments.

Dahik disagreed with the Authority and announced a recession.

“I can sign a statement that says there will be a recession in 2016. I can sign it here and we will see in December, and we will see who is right,” he challenged the professor of the Espiritu Santo University.

President Correa sends a letter to soldiers of the Armed Forces