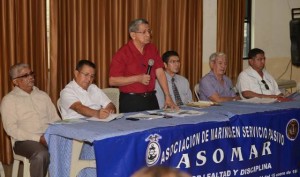 The government yesterday ordered the Ministry of Finance to debit $ 41 million from the accounts of the Institute of Social Security of the Armed Forces (ISSFA), which, at its discretion, were overpaid for the purchase of 660 parcels of land in where the Samanes Park, in Guayaquil, is currently build. A project carried out by the Ministry of Environment.

The announcement was made yesterday by the Secretary of Communication, Patricio Barriga, who read a statement to the media without admitting questions.

Then President Rafael Correa ratified: “I just have ordered the Ministry of Finance to deduct $ 38 million, I’m not going to argue with anyone, not even with my subordinates, as President and Commander chief, I command. While I am the president, the law will be fulfilled here.”

President Correa sends a letter to soldiers of the Armed Forces