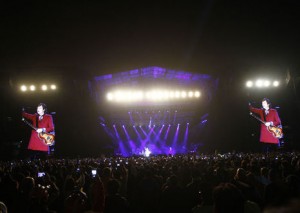 With the theme Eight days a week, the British singer Paul McCartney opened the concert after 21:00. At the Casablanca stadium lights were turned off for a moment, then turned on again with the appearance of the musician, who wore a black and white suit with an elegant wine jacket. `What say Quito?´ Were his first words, to then interpret the first song of his repertoire with his legendary bass.

`This guitar is the same with which I recorded this song in the 60’s´said McCartney to present his song `Paperback writter,´ song for which he changed his bass for the guitar. The artist not only shared his musical history but also his personal history, dedicating ‘My Valentine’ to his late wife Linda McCartney, playing this song sitting by the piano, revealing his powerful voice.